Why you should care about your nervous system – Happiness + Wellbeing Magazine Are you standing in your own w..

Why you should care about your nervous system

Why you should care about your nervous system I’ve always been an anxious person, or at least since I’ve been an adult. When I was 18 I moved from a rural fishing village in Nova Scotia to the vibrant coastal city of Vancouver. My nervous system was used to an environment that didn’t include street lights, traffic noise, or mobile phones.

At first, when I moved to the city the constant drone of construction zones, rush hour and high density housing felt exhilarating. But after a few months, I was exhausted. I started to feel like I was constantly on edge, and had a sense that there was never enough time.

I now know that this was my nervous system trying to keep me safe in an over stimulated environment by increasing the activity in the part of the nervous system that responds to ‘stress’.

However, this chronically overactive nervous system eventually led to anxiety and panic attacks.

Perhaps you feel it too? Like you’re always rushing from one thing to the next, or just have a general sense that things are never quite right. Or maybe you have issues with your digestion, energy levels or falling asleep. I know, that in the 12 years since I left that little fishing village in the country I’ve spent more time with an out of whack nervous system, than not.

The experience of a well balanced nervous system can bring feelings like peace, contentment or tranquility, but the state of your nervous system not only affects your emotions, it can also dramatically affect your health.

So, what exactly is the nervous system?

This question came up from a student during the latest module of 200 hr Slow Yoga Teacher Training – a useful question for a yogi, as one of the main pathways that yoga can impact our health and wellbeing is through its effects on the nervous system.

In simple terms, the nervous system is a vast network of nerve cells (called neurons) that include the brain and spinal cord, but also extends throughout the whole body.

Neurons are specifically designed for communication, to send information from the body to the brain, and from the brain to the body.

This is why paralysis can result from an injury to the spinal cord; the central pathways of communication between the brain and the body have been blocked or damaged. The brain and spinal cord make up a part of the nervous system called, fittingly, the Central Nervous System, or the CNS. The neurons that connect the rest of the body to the CNS are called the Peripheral Nervous System, or PNS.

The PNS is further broken up into three parts:

The Somatic Nervous System is mainly concerned with our voluntary movement of skeletal muscles. This is the part of the nervous system that helps you move smoothly from A to B, or create the exterior shape of a yoga posture.

The Autonomic Nervous System controls the functions of the body that can happen without our conscious control, such as the stress response, heart rate and breathing.

The Enteric Nervous System is embedded in the lining of the gastrointestinal system, and is often called ‘ the second brain’ because it can operate independently from the brain and spinal cord.

The enteric nervous system can also manufacture it’s own neurotransmitters like serotonin, which plays an important role in anxiety, depression and even sexuality. Some estimates say that the gut produces up to 80% of the body’s entire store of serotonin.

The role of the nervous system is to sense, via nerve cells and sensory receptors information from the internal and external environment, and make changes within the body in response to that information.

That’s why, when we dim the lights in a brightly lit room, we almost immediately feel more relaxed. Photoreceptors in the eyes perceive the drop in light and signals to the body, via the nervous system that it’s time to wind down and relax, in preparation for sleep. In the same way, tension in the muscles communicates to the brain, via the nervous system that we need to brace ourselves, or that for some reason, it’s not safe to relax.

The nervous system in action

So, now that you have a basic understanding of the scope of the Nervous System’s reach and function within the body, you can see that having a healthy, balanced and properly functioning nervous system will positively effect your entire mind-body system.

However, the amount of stimulation we receive in our modern day-to-day life often puts such a high demand on our nervous system it becomes overworked and exhausted. Remember, the main function of the nervous system is communication.

Imagine your having a conversation with a friend at work. At first, you give your friend your full attention, and you are able to listen to and comprehend the information that exists within your friends words. However, after a few minutes you get a text message, and then another. Some of your attention is diverted away from your friend and moves towards your phone. Then the phone on your desk rings, and another colleague calls out at you from across the room. While your friend has continued to speak, you’ve been unable to comprehend anything she’s been saying because too much information is coming at you at once.

Our nervous system evolved in a very different environment than the way we live now, so even simple things like constant background noise, bright lighting and a busy schedule can put a strain on our nervous system.

The good news? What we do and how we think can all impact the functioning of our nervous system. There are many simple, practical ways that you can counteract the demands of daily life, without picking up and moving to the country. The best tools to balance the nervous system are all yoga based, and in future articles I’ll share some of the main ways that you can use yoga to create or maintain a happy healthy nervous system. 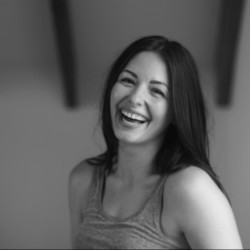 Cora Geroux
Cora Geroux is the founder of Slow Yoga, a full-time yoga teacher and a part-time introvert. Cora's has a BA in Psychology and is passionate about the intersection between Western science and Eastern wisdom. Cora believes that if we could all slow down, reconnect to ourselves, each other and the planet - life would be a hell of a lot more
satisfying & sustainable.

You can find out more about Cora by going to her website www.slowyoga.com.au or connecting with her on social media.